Home / About us / History

Mayfield Festival is bi-ennial and was founded in 1970 by Kenneth Pont, the then director of music at St Dunstan’s Parish Church. Mayfield is a picturesque Wealden village in the heart of the Sussex countryside. Most of the concerts take place in the 15th century St Dunstan’s church or in the Old Palace, one of six Sussex mansions which belonged to the See of Canterbury. It also contains a fine concert hall built in 1930 by Adrian Gilbert Scott. The buildings now house Mayfield Girls School, whose choirs regularly provide additional sopranos for festival choral works. 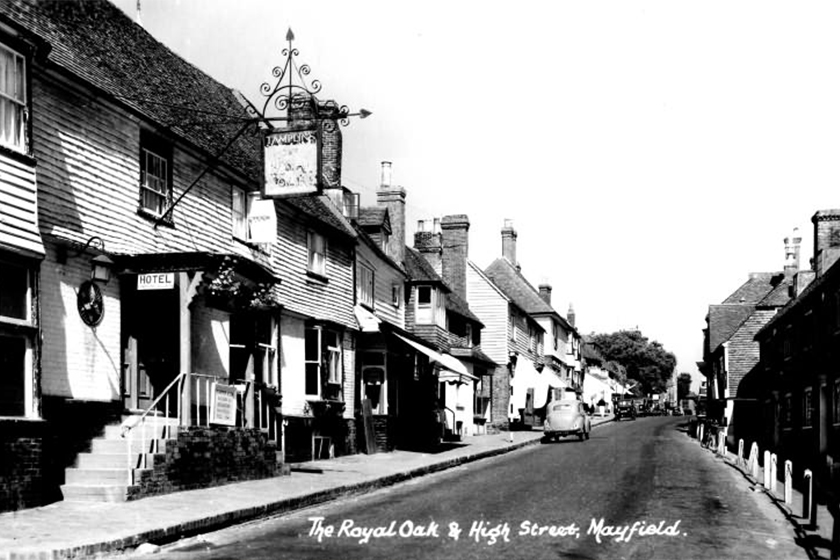 Audiences come together from all over the South-East to hear performances in these historic settings. Programmes have included performances by names such as John Ogdon, Peter Donohoe, Paul Tortelier, Igor Oistrakh, James Galway, Evelyn Glennie, Victoria de los Angeles, Dame Janet Baker, Emma Kirkby, Sir Thomas Allen, Sir Peter Maxwell Davies and in the 2018 festival Stephen Kovacevich. The 2022 festival will include a recital by Joanna Macgregor.

Chamber music has featured with string quartet concerts by the Allegri, Borodin, Takacs and members of the Amadeus Quartet. Julian Bream, John Mills and Paco Pena have appeared in guitar recitals. Band concerts have included visits from the Philip Jones Brass Ensemble, the Bands of H.M. Royal Marines, Coldstream Guards and Grimethorpe Colliery. The Primavera Chamber Orchestra also features regularly and in 2021 performed both Schubert’s and Mendelssohn’s Octets at the festival’s summer music weekend.

In 1976, Sir David Willcocks began an association with the festival and conducted one of the two large-scale choral works at every Festival until 2002. His fifteen appearances with the Mayfield Festival Choir included the Bach’s Mass in B minor, the Verdi Requiem, Elgar’s The Dream of Gerontius and Mozart’s Grand Mass in C minor.

In 1997, a new Walker Organ was installed in St Dunstan’s. This has widened the repertoire of organ recitals to include Dame Gillian Weir, John Scott, Simon Preston and Olivier Latry, and in the 2018 festival James O’Donnell, organist and master of the choristers of Westminster Abbey.

In the year 2000, a unique concert of 100 Belfries was the result of an association between the French Festival “Rencontres en Pays de Bray” in Normandy and Mayfield. A completely new work was created for the Millennium by an English and French composer. It was performed simultaneously in the churches of Notre-Dame, Neufchatel and St Dunstan, Mayfield. Both churches were linked by radio landline and the narrative and music was broadcast alternately between the venues by BBC Southern Counties Radio and Radio France Normandy. At one point, all the bells of 100 participating churches on both sides of the Channel rang a unified celebration of the Millennium.

The Southbank Sinfonia are regular performers at the festival. Founded in 2002, the Sinfonia consists of 33 graduate musicians from around the world who train for a year, under the directorship of Simon Over, to give them opportunities for performance and professional development. During the 2022 festival they will perform a concert featuring Elgar, Walton and Vaughan Williams’ 5th Symphony.

In 2016 the festival adopted the Tunbridge Wells International Music Competition which runs over a period of five days at the centre of the festival. Winners have included Paul Lewis, Yuri Didenko and Anne Sofie von Otter. In 2016 the winner was Amalia Hall who is now Concertmaster of Orchestra Wellington. In 2018 Toby Hughes, the double bassist, won the competition. He has won numerous awards and featured in this year’s BBC Proms.

Kenneth retired as Festival Director in 2004 and was succeeded by Neil Mackie CBE. In 2014 Jeremy Summerly was appointed the Festival’s Artistic Director. Jeremy is Director of Music at St Luke’s Chelsea and a broadcaster for BBC Radios 3 and 4. He founded the Oxford Camerata in 1984 who regularly performs at the festival. In 2022, along with the Mayfield Consort, they will perform Tallis Spem in Alium and Vaughan Williams’ Mass in G minor.

In 2018 the festival mounted a competition for composers to write a cantata based on the life of St Dunstan. The new cantata was designed to be ready for performance in 2020 to celebrate the 50th anniversary of the festival. The competition was won by Nicholas O’Neill, composer-in-residence and chorus master of the Parliament Choir. As well as a prolific composer, Nick is also a lecturer, author, and keyboardist with rock band JEBO. Interspersed within the Cantata is a Mass setting composed by St Dunstan’s Director of Music, Andrew Benians, and a set of Evening Canticles by the Festival’s founder, Kenneth Pont. Jeremy Summerly wrote the libretto and composed a Prologue based on plainchant attributed to St Dunstan: the Prologue will be played by double bassist Toby Hughes, winner of the 2018 Tunbridge Wells International Music Competition. The delayed première of the Cantata of St Dunstan has been rescheduled for the 2022 festival.